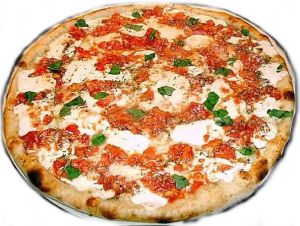 Traditional Neapolitan cooking is very rich and complex, with many simple but complete foods, such as pizza, as well as elaborate and tasty dishes. Many years ago, pizza and macaroni were the foods that served to fill the bellies of the poor, who were forced to put off the next meal for at least twenty-four hours. But in fact this often had to last for weeks, even months, until some special occasion presented itself, usually a religious festival - and then, what a time they had of it! - everything imaginable was cooked and eaten. At last, they sat at a table with a rich, abundant meal in front of them. This was the time they got their strength back and recharged themselves for the rest of the year, or at least up until the next festivity. Most times, people preferred, or were forced, to have a quick snack. The "maccaronaro" was the old-time snack bar, and outside it the Neapolitans stood waiting for a hot meal to eat standing or walking.

Macaroni is a wise invention of poverty. The simplest, most logical and basic use of wheat. It is cooked in plentiful salted boiling water and eaten slightly underdone, so that it retains a suggestion of hardness. Some time ago, it was the custom to eat it with the fingers. But the food that responded best and most satisfactorily to the needs and "take it or leave it" life of the poor was pizza. It was, and is still, a kind of flat bread made of slightly leavened water and flour, mixed with diluted bacon-fat and with pieces of tomato, slices of mozzarella and basil leaves. Or it might come with olive oil, tomato pieces, fresh, filleted anchovies, plentiful origan and a clove of garlic. It is cooked in a baker's oven with plenty of well-heated wood. Pizza used to be eaten (and sometimes is even now) folded in four or simply folded over once.

Pizza has given rise to legends and myths surrounding its origin; its real origin is in the 16th century, when the fragrant and tasty solanaceae plant was introduced into Europe from Peru. Pizza was the favourite not only of the people, but also of the ladies and knights and even "among the gold and damask of the Court". In the woods of Capodimonte, the wife of Ferdinando IV, Maria Carolina, had a special pizza oven built to make her own meals and those of her guests more enjoyable.

The finishing touch was added in the 19th century with the introduction of mozzarella, which was added to the tomato. And so was born the Margherita, so called in tribute to arrival in Naples of the consort of Umberto I, a loyal connoisseur of this unbeatable specialty. Its inventor was Raffaele Esposito. One day in 1889, an official of the Royal Court went to the Pizzeria di Pietro, run by Raffaele, and asked him if he would go at once to the Royal Palace of Capodimonte to show the sovereigns what an excellent cook he was.

The Queen said later that the pizza she lliked best was the one with mozzarella and tomato, which was then given the name of Margherita.
Over the centuries, piazza has remained more or less unchanged; additions have been made, especially new toppings invented by the "pizzaioli" (pizza-makers) who continue to amuse themselves with original toppings. The atmosphere of the typical pizzeria has also undergone little change, and it is still full of an atmosphere of lively welcoming for everyone, rich or poor.

Neapolitan cuisine is extremely varied and the various dishes coincide with the many annual festivities. Each of these festivities is a gastronomical occasion.

Cakes eaten throughout the year