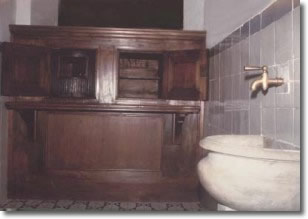 The wheel of the foundlings

This "Sacred House" was erected in the 14th century together with the annexed church as a charitable institution for the care of abandoned infants. It was reconstructed first in the 16th century in Renaissance form, and then in the 18th century by Luigi and Carlo Vanvitelli, after a fire. The fine marble portal, made in the 16th century by the Lombard artist Tommaso Malvito and his son Giovan Tommaso, has wooden doors carved by Pietro Belverte and Giovanni da Nola in the 16th century; it is through this portal that we enter the monumental courtyard of the House and the wooden "Wheel".

Abandoned babies were placed in a kind of wooden cylindrical drum and taken out on the other side by thw nurses who were always ready to receive them. On the exterior, above the wheel, there was a marble putto with the inscription: "O father and mother who throw me here / We reccomend ourselves to your charity". The "guests" of the institution were called "children of the Madonna", "children of Nunziata" or "esposti" (foundlings) and enjoyed very special privileges.

Some were found with a sheet of paper bearing the parents' name tied around their neck, or they carried a piece of gold or silver; others had nothing. Everything they wore and every sign they bore was noted in a book in order to facilitate an eventual recognition by parents. The Wheel, so sadly fascinating, was one of the best known in Italy; it was last used in 1875.

The marble portal, the wooden doors and the interior lunette fresco representing the Annunciation attributed to Belisario Corenzio are now on public view after the restoration completed in November 1996. The restored "Wheel" was added in 1997. The museum is managed by the Servizio Patrimonio Artistico Museale of the Commune of Naples with staff of the Commune and by socially useful workers.

Opening times
From Monday to Saturday 9 am - 7 pm.