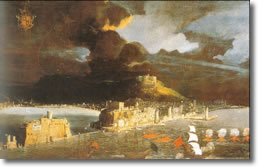 Castel dell' Ovo stands on the islet of Megaride, two rocks linked by a large bridge. Colonists from Cumae (their origins being partly Greek) landed on this islet towards the middle of the 7th century BC and eventually founded the city of Partenope (or at least the first nucleus of it) on Mount Echia. In 1949 the necropolis of the city was found in Via Nicotera 10, where they were digging to lay the foundations of a new building in replacement of the previous one which had been bombed during the Second World War.

The famous villa of Lucius Licinius Lucullus was built on the islet and Mount Echia, in the 1st century BC, during the Roman domination. The villa was magnificent, with gardens and fountains extending as far as the present Town Hall Square, as we can see from a structure brought to light during recent excavations beneath Castelnuovo.

Very few signs of this villa remain; there are parts of columns from the so called "Columns Hall", which, during the first half of the Middle Ages, was used as a refectory of one of the convents built on the islet, and the remains of a nymphaeum on the terrace of Mount Echia.