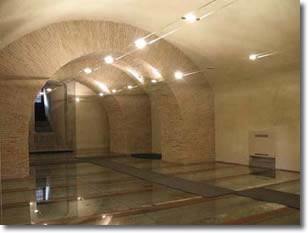 During restoration works on the northern curtain, below the Barons' Hall archaeological finds of the Roman era came to light, dating from between the end of the 1st century BC and the second half of the 5th century AD.

In the area known as the Armoury Hall, which once had this function, remains of the settlements that existed before the Angevin castle have been found.

Near the entrance, there is a pool or bath from a suburban villa which dates back to the second half of the 5th century AD, partly lined with white marble slabs to which the Angevin walls are joined. The oldest part, on the east side, of the late republican period (end of the 1st century BC) consists of a wide apse with five semicircular niches.

The most probably hypothesis is that this was a swimming pool or a canal of the peristyle or the garden of the villa. Along the coast of Neapolis, during the years between the end of the Republic and the beginning of the Empire, numerous residences were built, the most important of which was that of Lucio Licinio Lucullo which stretched from Castel dell'Ovo to Pizzofalcone, and according to some researchers, as far as the Royal Palace and Castel Nuovo.

Later (6th-12th centuries AD), the area became a necropolis, and some fifty burials have actually been found there, the tombs both of adults and children, male and female, buried with a few personal objects such as rings, earrings and a pair of bronze spurs decorated with a rampant feline (kept in the Archaeological Sovraintendenza of Naples). In this area have also been found ceramic materials both of local manufacture and imported from Africa and the East.

The Armoury Hall will house a multimedia exhibition with information and images of Castel Nuovo and on the history and art of Naples.