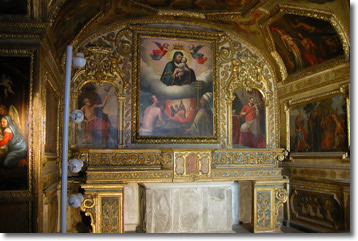 Built about between 1580-81, when the changes ordered by the Spanish viceroys were being made, this chapel is probably the same one as the 14th-century Chapel of San Martino di Tours, and was once frescoed with stories of the saint's life.

The interior is decorated in baroque style with frescoes and paintings on panels set in stucco and gilded wooden frames. Over the main altar is the canvas painted by a late-mannerist painter influenced by Girolamo Imparato and Giovann'Angelo D'Amato showing the Madonna del Carmine with the suffering souls and Saints Sebastiano and Gregorio Magno.

An ancient source tells us that Giovanni, brother of the Neapolitan revolutionary Masaniello, was buried here; the condemned to death received the sacraments before being executed.