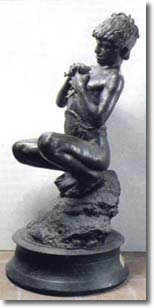 On the second floor are exhibited works dating from the 18th to the 20th century. In the first room we notice the Five Ovals by the painter Jacopo Cestaro from Bagnoli Irpino, which recovers the great artistic tradition of the late Solimena.

The exhibition is organised on a theme basis: historical events, landscapes, views of the city of Naples, portraits of women and household episodes. Gioacchino Toma, one of the most important 19th-century artists, is represented by two canvases (Mass at home and A close examination of the Sant'Uffizio) which proove his skill at painting "interiors".

Michele Cammarano's Massacre of Altamura is an intensely dramatic narration of one of the bloodiest episodes of the Parthenopean Republic of 1799, the attack on the city of Altamura by Cardinal Ruffo's troops. One of the views of the city is particularly suggestive: an image of The old Naples by Vincenzo Caprile, whose verist style illustrates a scene of everyday life of a popular area near the present-day Piazza Borsa, before slum redevelopment was carried out.

In the museum, there are also two sculptures by Vincenzo Gemito: one is a bronze, a copy of the famous Fisherman in the Bargello Museum in Florence; the other is a terracotta naturalistic figure of the sad condition of an adolescent orphan. In 1999 the Civic Museum acquired the section of busts given as a gift to the Commune of Naples by descendents of the Calabrian artist Francesco Jerace, an important Neapolitan sculptor of the second part of the 19th and the first part of the 20th century.