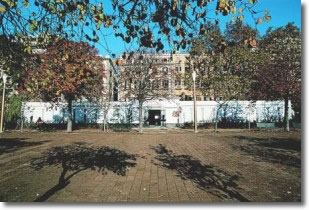 Built in 1870 in neoclassical style, the name "Pompeiorama" derives from the permanent exhibition of views of Pompei that was curated by the painter F. Maldarelli and then by the photographer Lauro. Restored in 1891 by the architect Chioccarelli, it became the exhibition hall of the Circolo Artistico Politecnico.

After World War II, it became the seat of the "Salvator Rosa" Promoting Society of Fine Arts. Since 1997 it has once again begun to be used by its owners, the Commune of Naples, for exhibitions of contemporary art and for various cultural events. The Casina (literally Little House) stands in the wonderful setting of the Villa Comunale, which was the wish of Ferdinando IV of Bourbon who in 1778 entrusted its realisation (1778 - 1780) to the architect Carlo Vanvitelli.

The "Real Passeggio di Chiaia" (Royal Walkway of Chiaia), opened in July 1781, was inspired by French gardens with long parallel avenues ornamented with statues and fountains. It stretched from Piazza Vittoria to the present-day Cassa Armonica, was surrounded by railings and just before the main entrance, at the piazza end, there were two symmetrical buildings with cafés and shops. A new design of  1807 - 1815 by the architect Stefano Gasse altered the Villa Comunale by adding a new area in the form of a grove with irregularly-shaped flowerbeds in the style of the  Romantic English garden.

In 1834 "the walkway" was extended as far as the present-day Piazza della Repubblica. Of the project by the architect Enrico Alvino, which cut the villa off from the sea side with a long line of cast-iron columns and numerous glass-roofed pavilions, only the 1877 Cassa Armonica was built, a fine cast-iron structure closed by two-coloured glass roof. In 1872 began the building of the Zoological Station, a world-famouns scientific institution, founded by the Darwinian Anton Dohrn and opened to the public in 1874. Inside, the 19th-century frescoes of "marine and rustic scenes" by the German painter Hans Von Marèes are particularly beautiful.

This Zoological Station also houses the Acquarium, one of the oldest in Europe, which exhibits animal species coming from the Gulf of Naples. The Circolo della Stampa (Press Club) was built in 1948 by the architects Luigi Cosenza and Marcello Canino by extending a pre-existing building. The Servizio Patrimonio Artistico e Museale of the IX Direzione Centrale of the Commune of Naples oversees the whole of the Villa Comunale with staff from the Commune and special services personnel.