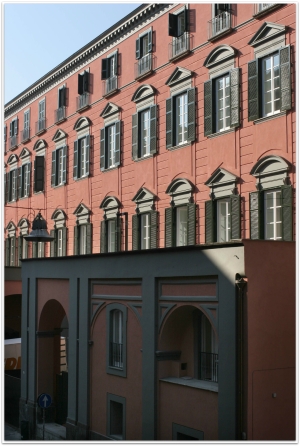 Built originally outside the walls of the old town of Naples, in 1667 Francesco di Sangro, Prince of San Severo, gave his former country residence to his son-in-law Don Giuseppe Carafa. In 1717 the "palatial home", its gardens and land were sold for ten thousand ducats to Ippolita Cantelmo Stuart, wife of Vincenzo Maria Carafa, fifth Prince of Roccella. Stuart commissioned Luca Vecchioni, who worked closely with Luigi Vanvitelli, to remodel the building and its outbuildings.

Building conversion and extension work lasted a decade, from 1755 to 1765. Once the works had been completed, the building had been transformed into a true residential palace. To make it economically viable, a number of buildings were built along the main access road for the purpose of renting them out. Clearly inspired by Vanvitelli, Vecchioni's design was based on the criteria of greatest possible symmetry, with the main entrance door and principal stairway right in the middle. His design also exploited the roofs of the wings, with their first-floor terraces.

A second floor was completed between 1765 and 1829 and building work began on a third floor. During this period Vincenzo Maria Carafa and his wife Livia Doria moved into the Palazzo. Their inventory reveals that they moved into a 45-roon apartment decorated with luxurious furniture and a gallery of more than 130 paintings. In 1885, a new road, the Via dei Mille, cut the building in two, destroying its covered atrium and isolating the buildings for rent on the far side of the street.

Between 1950 and 1959, the last remaining vestiges of the original "garden of delights" surrounding the building was lost. Remodelling in the 1960s spelled the end of the last traces of what little of the building's artistic heritage survived the slow trickle of sales the family had been forced to make. The Municipality of Naples purchased the property in 1984 and began restoration work. In February 1998, the Municipality announced that Palazzo Roccella would become a Documentation Centre for the Contemporary Arts. Covering some six thousand square metres over three floors, PAN stages temporary exhibitions in Naples and is home to a Documentation Centre that encompasses an archive, a library and a media library, as well as serving as a venue for cultural and workshop activities.