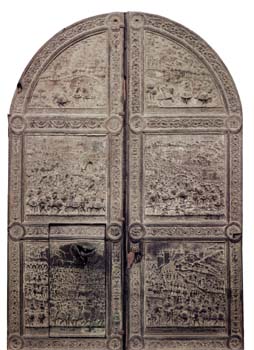 Guglielmo Monaco,bronze door of the castle

This door, which was originally located at the entrance to the castle, was commissioned to Guglielmo Monaco by Ferrante d'Aragona in about 1475 in memory of Ferrante's victory over Giovanni of Anjou and the rebel barons in 1462.

The six bas-reliefs on the door, framed by decorations with Renaissance motifs, narrate the most important episodes of the war:

There is an iron cannon-ball embedded in the ripped plate in the bottom left hand panel.

The most likely explanation of this is that the door was part of the spoils which Charles VIII had loaded onto the ships sailing for France. During the voyage, just off the shore of Rapallo, the fleet was attacked and conquered by the Genoese. In the course of the battle the door, which was perhaps on the deck of one of the ships, was hit by a cannon-ball which remained stucked in the panel. Having won the prize, the Genoese sent the door back to Naples (1495).