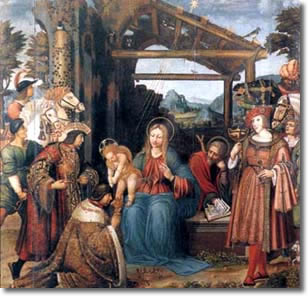 On the first floor are exhibited works (paintings, sculptures and liturgical trappings) mainly commissioned by the clergy; they date from the 15th, 16th, 17th and 18th centuries and mainly come from churches and suppressed institutions, among which the Real Casa Santa dell'Annunziata and the "Sant'Eligio" Institute for Instruction and Assistance to Women.

One of these works is the panel of the Adoration of the Magi (about 1519), which was once to be found on the main altar of the Palatine Chapel; it's an early work of the Calabrian artist Marco Cardisco and shows Ferrante I, Alfonso II of Aragon and Charles V dressed as the Magi. One of the few paintings of a non-religious character is the Still Life with Fish by Giuseppe Recco, which dates from the second half of the 17th century and shows that the painter belonged to the great Neapolitan naturalistic tradition.

Next, we find the paintings of the major exponents of Neapolitan Baroque: Luca Giordano and Mattoa Preti. The painting San Nicola in Glory, painted at the age of twenty-four, shows how far Giordano was oriented towards a monumental style with fluid brush-strokes and golden tones, which translate into Baroque language the style of the great Venetian masters of the 16th century. The Madonna of the Rosary with Saints is attributed to Preti's last visit to Malta (1660), being the compositive scheme full of figures and the reflections of red light in the background, which are typical of his painting.

The Miracle of San Giovanni di Dio by the Neapolitan painter Francesco Solimena is dated back to 1691; it was painted for the Ospedale della Pace (Hospital of Peace)on the occasion of the saint's canonization. Solimena manages to retain in his dark colours the style of Preti, moving away from the bright colouring of the contemporary frescoes of the sacristy of San Paolo Maggiore. Numerous works in silver belonging to the rich liturgical decorations of the Annunziata are held in this museum, among them the precious 16th-century Crucifix with the Madonna and San Giovanni Evangelista in rock crystal and silver.