the legend of the crocodile 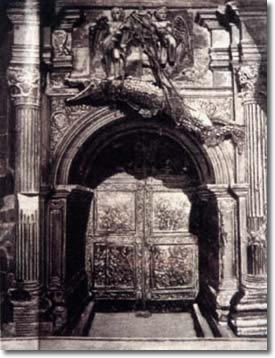 In the basement there are two spaces below the Palatine Chapel, one called the "mile pit" but more commonly known as the "crocodile pit", the other called the "prison of the Barons' plot".

The "mile pit" was a wheat store in times of the Aragonese court, but was also used for prisoners with heavy sentences. An old legend recounts that the prisoners disappeared mysteriously, and when more guards were put on, they soon discovered why. A hole let in a crocodile which savaged the prisoners' legs and dragged them into the sea. The crocodile came from Egypt in the wake of a ship, and for some time it was fed with prisoners who should die without causing a sensation.

To kill the crocodile, an enormous horse's haunch was used as bait. Once dead, the reptile was stuffed and hung on the castle entrance. This is in fact nothing more than a legend that repeats a widely-told popular story common to many countries - the story of prisoners devoured by a crocodile, a snake or other monsters, which in this case has been adapted to the Neapolitan castle.

The access to the second space is through a narrow passage, to the right of which there is a tuff spiral staircase which leads to the Palatine Chapel above it. In this space are four tombs without inscriptions, containing mortal spoils, perhaps those of the nobles who took part in the Baron's Plot in 1485. De La Ville Sur-Yllon in 1893 described the bodies as being dressed in the 15th-century style and that one of these, perhaps a prelate, died of suffocation.

Other places in the castle which have occasionally served as prisons are the underground spaces beneath the Gold Tower, the Watch Tower and the Tower of San Giorgio.